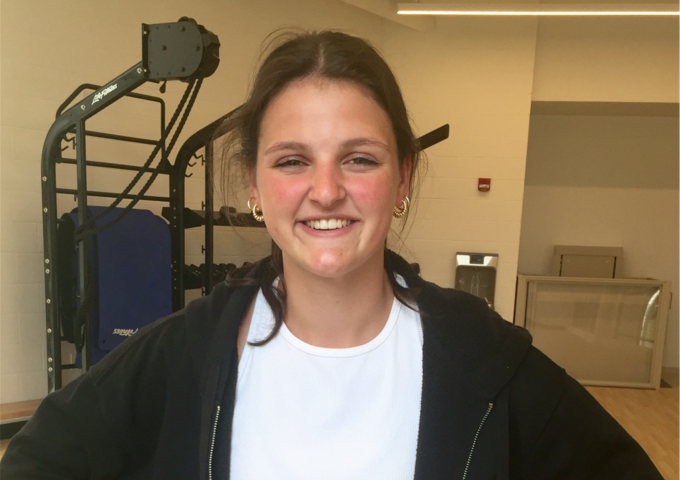 Clifton Park, NY,  6/2- 6/3- It was a strong two-day showing for Greenwich's track and field athletes at the Section 2 State Qualifier meet at Shenendehowa High School. Deontae Bennet, Keegan Collins and Nina Sgambelluri all qualified for the State Championship meet at Cicero North Syracuse on June 10th and 11th.

Each section of New York State is guaranteed one athlete per event in the large school (Division I) and small school (Division 2) divisions: the event winners of the section's state qualifier meet. A state meet invitation is also extended to the second finisher who has met a very high “at large” standard. Lastly, additional athletes who have met the “super standard” are invited. Greenwich competes in the small school division.

It was a disappointing end to an outstanding season for Kiersten Alling, who just missed the cut for the State Meet. At the state qualifier, she was second in the small school shot put and outperformed all large school athletes in the event with a throw of 35' 4”, but she did not meet the 'at large” standard. Similarly, she actually met the super standard in the discus, with a throw of 118' 10”, but it was in a dual meet, which does not count. She was a close third in the discus at the qualifier and would have been second in the large school division.

Eighth grader Sarah Radovich ended her sterling rookie season with an impressive 13.03 in the 100M, good for fifth at the qualifier, and joined teammates Catherine Abate, Molly Abate and Tayler Cristaldi for a second place in the 4x100M relay.  Only Cristaldi is a senior, so with expected improvement from the remaining runners, the school record in this event could be challenged next year.

Christian Vandoren was third in the pole vault and first year thrower Ryan Alling was 6th in the discus. Alling's season bests of 132' 3” in the discus and 40' 11” in the shot put are promising marks to build upon for next year.